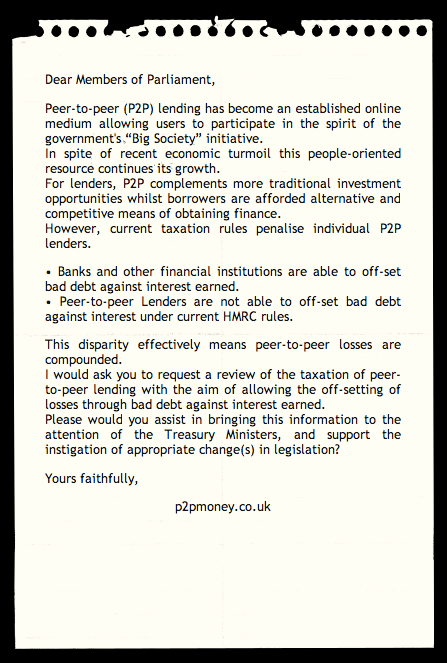 So that’s one battle won – or at least the first round, no doubt there is a whole host of further debate to come regarding exactly what shape the new regulation takes…

In the meantime, however, there’s an existing regulation that peer to peer lenders want changed – and that’s the treatment of losses.

Whereas banks and other financial institutions are able to off-set bad debt against interest earner, peer to peer lenders are not under current HMRC rules.

This is not only unfair but fundamentally compounds the impact of any peer to peer losses.   P2Pmoney.co.uk has helpfully crafted a suggested letter that anyone who agrees that the current state of affairs is wrong can cut and paste and send on to their local MP.

You can find the letter here on the www.p2pmoney.co.uk website. 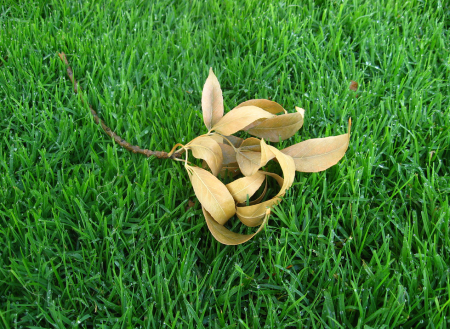 Following Friday’s news that peer to peer lending, including peer to business lending  is set to be regulated by the FCA (the regulator about to replace the FSA), the industry has received a further boost with news that RIT Capital Partners, Lord Rothschild’s London-listed investment trust has invested in Zopa, the UK’s first peer to peer lender who started the alternative finance wheels in motion back in 2005.

It’s a move which will inevitably prompt a whole host of “old meets new” clichés as one of the most famous bastion’s of banking joins forces with a disruptive player on the alternative finance circuit.

“We are witnessing the growth of the non-banking lending market.  Following the 2008 crisis many of the banks remain under capitalised.  In these circumstances alternative forms of credit will be developed on a significant scale.  This is happening.”

UK peer to peer lending enthusiasts will no doubt watch to see whether the involvement of such an internationally renowned name does for Zopa what the arrival of John Mack did for Lending Club.

Lending Club have now processed over $1bn of loans in the US and their success has often be credited, in part, to the fact that they managed to engage the support of a recognised industry chief who could bring Lending Club the gravitas it needed to go mainstream.

Although Lord Rothschild left his family bank three decades ago, his name remains synonymous with what was once the globe’s most impressive banking group.  The decision of RIT Capital Partners to invest in Zopa will surely be seen as a rubberstamp for an industry which is rapidly growing from a small stream of niche financing into a genuine alternative to mainstream banking.