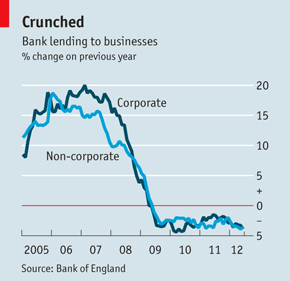 The latest figures released by the Bank of England at the end of July confirmed what most of us probably already sensed, that bank lending to businesses is continuing to fall.  Lending to companies has now dropped more than 25% below its peak at the end of 2008 according to the figures and this article from The Economist about why growing firms need to look beyond the big banks for credit.

Although some of the reduction is undoubtedly caused by businesses deciding to borrow less whilst they sit out the ongoing economic storm, The Economist is just one of the commentators who note that the “high and rising cost of bank loans suggests credit supply is still a problem.”

They go on to note that “bank credit is likely to remain scarce when business confidence eventually recovers.  The international rules on how much capital banks must set aside against different sorts of loans, known as Basel 3, make small-business lending a costly proposition.  Old loans weigh on scarce capital, limiting the scope for new ones.”

So, that explains why the funding gap – which might prove as large as £191 billion according to Tim Breedon – exists.  The next question is how to fill it?

Raising money directly from savers is what peer to business lending is all about of course.

The experts think “such markets should grow as more business folk gradually find out about them.  The hope is that banks do not further retreat from corporate lending before alternative sources can fully emerge.”

So, do your bit and help spread the word about peer to peer lending for businesses… local independent businesses might turn out to be very grateful…